I was back in the British Library for the first time in a while yesterday having decided over the last few months that I can’t afford a career in French academia. Working long hours for free or a pittance, spending a fortune on travelling and conference fees, not to mention the cost of image rights and publications have taken their toll, so I’m concentrating on the bright lights of poetry…! Yesterday reminded me however of the upside, the sheer joy of finding out new things, of diving headlong into a rabbit hole… I love research, of course I do!

The thing that prompted my return was an unexpected day free of rehearsals for The Shipwrecked House to prepare a talk I agreed to give at a one-day conference next week: Popular Reaction to Napoleon’s 100 Days: Print, Satire, Song and Theatre. The whole day is completely up my alley, as my thing is popular culture! My thesis was on popular culture during the French Revolution, particularly satirical etchings but also songs, plays (both performed and not), pamphlets, etc. What’s new this time around is the Napoleonic setting.

Now, I think I’m a bit territorial about my thesis and will argue until the cows come home that French Revolutionary prints are the best thing.

Goodness me do I love Napoleonic prints too, especially ones featuring the man himself: dressed as Pierrot, riding a lobster, eating snakes, falling off a cliff, being a bossy boots,… They’re gloriously vivid.

For the conference, we’ve each been asked to pick an object from Napoleon’s 100 days (i.e the 100 days in 1815 in which Napoleon escaped from Elba, made a grab at power and was eventually defeated at Waterloo). The one I picked is this splendid print of Napoleon’s return to France: 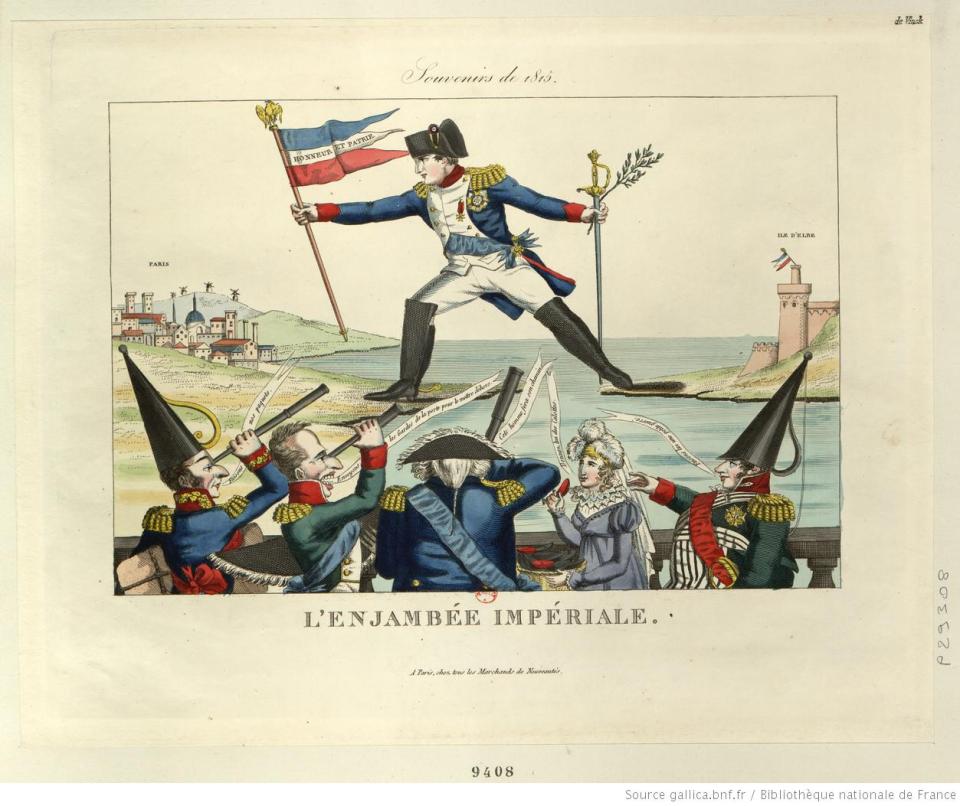 Isn’t it great? Even better are the two members of the anxious Bourbon party wearing extinguishers on their heads. It refers to a term, ‘chevaliers de l’éteignoir’ used by the satirical paper Le Nain Jaune to mock those belonging to the old French regime. Quite literally, they are trying to extinguish the flames of enlightenment! Le Nain Jaune was pro-Napoleon so this depiction is rather apt.

Here are some more éteignoirs, just because: 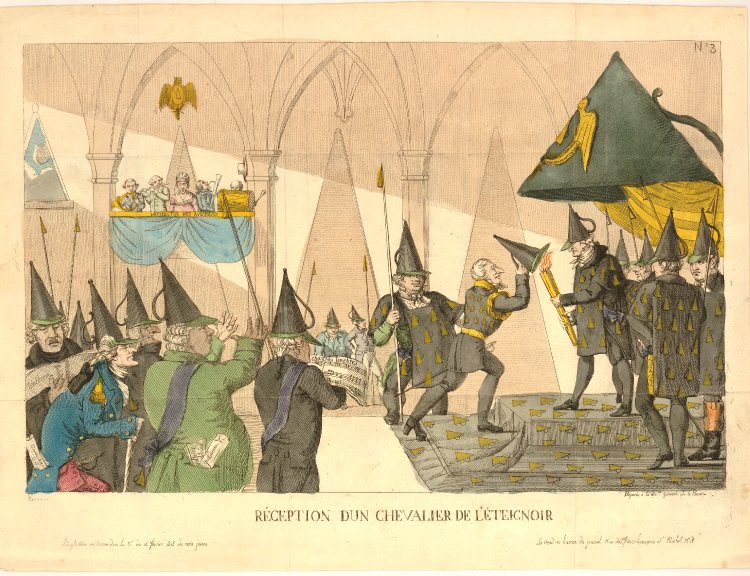 What drew me to this print however is that I recognized in it a leitmotif found in two French Revolutionary prints from 1791: 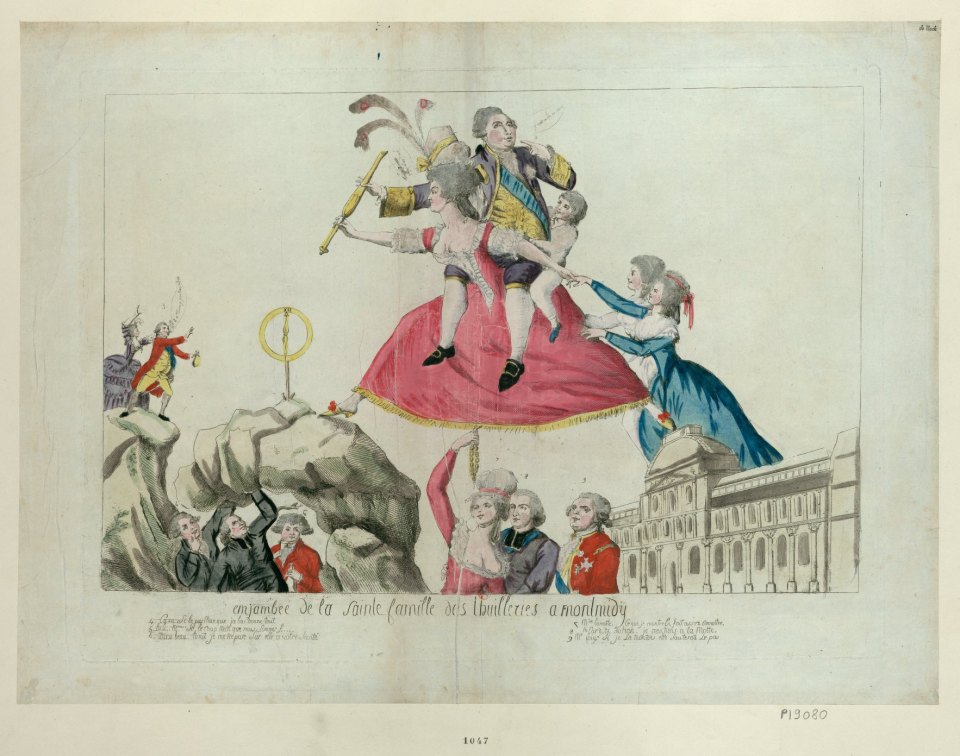 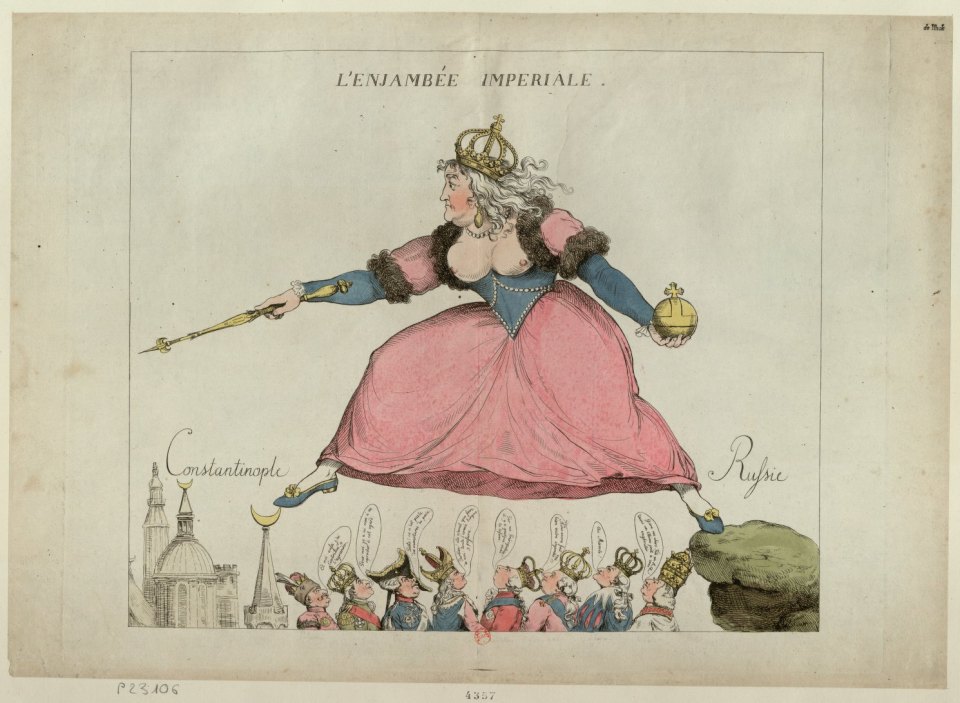 Yes, the Standford link will say the print dates from 1792-1794, but this is wrong. The courrier des 83 départements of 3 June 1791 announces it so it pre-dates the Marie-Antoinette print.

Not so flattering, eh? The first one depicts Marie-Antoinette escaping the Tuileries palace, the other Catherine II of Russia taking a conquering stride. Both are rather lewd, in the first the comtesse de la Motte-Valois (of the affair of the diamond necklace) holds up a necklace up Marie-Antoinette’s skirt which is both a reference to the affair and to sexuality (jewels in French refers to female genitalia), Catherine II is bare-breasted, and in both cases everyone is looking up their skirts.

Whereas in the case of Marie-Antoinette and Catherine II female agency is seen as a negative trait to be mocked, it is celebrated in Napoleon. Some things never change, eh?