I have a bit of a twisted fascination for Revolutionary characters that suffer a dramatic downfall after a large amount of popularity. One of these is three times minister of finances Jacques Necker who, frankly, did not have the easiest ride. His infamous Compte rendu au roi (1781) was a document in which Necker manipulated the accounts to present a more positive image of finances. Through this, he gained a tremendous amount of popularity, sometimes depicted as a saviour of France (there was an outcry when he was dismissed on 11 July 1789, just before the storming of the Bastille). By 1790, however, it was clear that he was not up to the task and his popularity evaporated.

I want to draw attention to two prints from 1790 which depict Necker as a charlatan. They’re part of a much wider trend of prints that are fascinated with the concept of unmasking (but that’s a whole other story).

(roughly, it translates as ‘and shouldn’t we recognize from certain signs the deceitful hearts of humans’)

This etching was an illustration in the book Necker jugé par le tribunal de la lanterne (1790), people must have been a bit confused about it as an explanation was also printed (translation mine):

We read the following: “The King accuses Necker of quackery. In his anger, he flipped the table on which were the instruments, such as cups, nutmegs, wand, etc. The gaze of the king is mingled with indignation and surprise, and he looks ready to burst out in anger against Necker. Necker is depicted with the charlatan apron. He wears a hand to his forehead to mark his humiliation, and the other to his heart, and seems to say to the king “ah! Sire, if you knew my heart!” Through one of his eyes, a mocking laugh escapes, which shows that this adventurer trusts the king’s weakness. A deity embraces with one hand a gallows, and on the other, she directs the rays of the lantern to the chest of Necker, where we see snakes emanate, symbols of the passions that animate this minister. The figure of the deity seems to laugh to mark the joy she feels at having unveiled the heart of this false and corrupt man. Both verses that are at the bottom of the print, are ideally suited to the subject. The French should not regret to have not known sooner the uselessness and vices of this minister, that they had adored so blindly.”[1]

The lantern was used very frequently in 1790 prints, in part because this word has a double meaning, referring on the one hand to the illuminations of a magic lantern, and on the other to lynching. Both senses are used here. 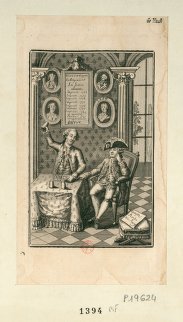 Let’s look at another print, ‘Compte Rendu au roy’, which was published in May 1790 in the Révolutions de France et de Brabant of Camille Desmoulins. The image is without a legend, but earlier in the newspaper, the following appears (my translation again): ‘Necker asked again on Monday for 20 million […] he is always asking for money […] we ask him for accounts, accounts, and he never hands in his accounts […] I demand that […]  Necker the charlatan should be arrested.’[2]

This print is less obvious than the previous one in its satire, until you look at the framed text in the background (‘New way to regenerate France: borrow 1774 / borrow 1775 / borrow 1776 […] product of these operations: deficit’). In the foreground Necker makes a game out of the accounts – but it looks like the king is not convinced.

For now, at least, artists are still willing to give Louis XVI the benefit of the doubt.

Charlatans, as the ultimate manipulators, are no strangers to brutal reversals of fortunes, and Necker’s own iconographical evolution deserves its own study, alongside the more popular Marat, Mirabeau, or Louis XVI.

The digitization of eighteenth-century resources is an ongoing project, here are some of my favourite iPad apps, designed to enhance teaching, facilitate research, or simply entertain: